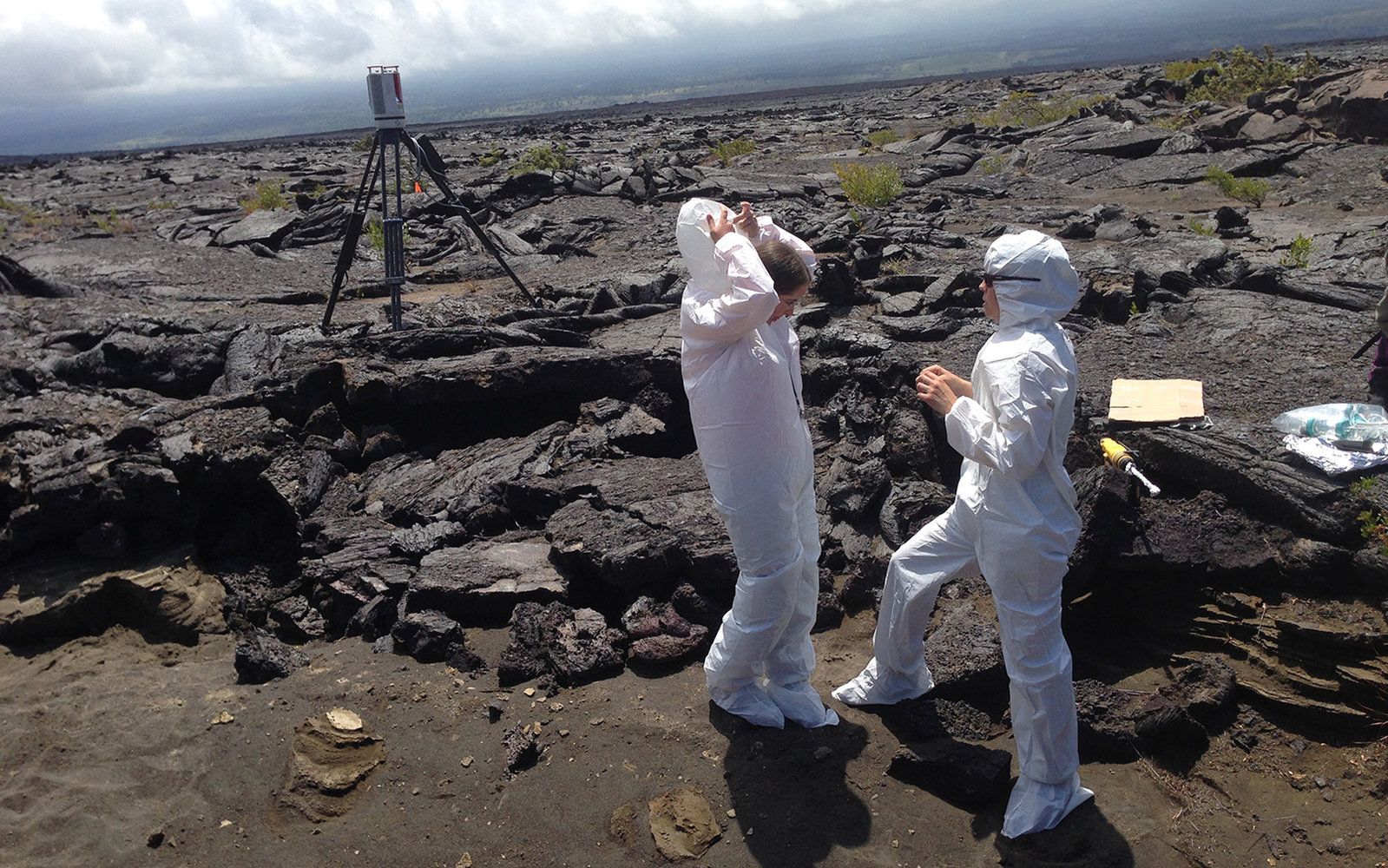 For some, their research — though still on planet Earth — takes them to remote, isolated destinations, such as lava fields beside active volcanoes, near-impassable coastal swamps, and frozen deserts. While there, scientists explore inhospitable and sometimes dangerous surroundings, to learn more about our dynamic planet and how its systems work, and to better understand how similar environments and conditions could shape other worlds.

At Future Con on Friday (March 31), a panel of scientists with NASA’s Goddard Space Flight Center (GSFC) introduced a rapt audience to some of the research that takes them not to space, but to icy Antarctica, into fresh lava deposits in Hawaii, and clambering over the enormous roots of mangrove forests in central Africa. Their research uncovers Earthly planetary secrets, and could help explain environmental changes on Mars and our moon, as well as on other moons and planets within our solar system. [Explosive Images: Hawaii’s Kilauea Erupts for 30 Years]

Even when NASA field science focuses on Earth, the scientists are often working in close collaboration with spacecraft orbiting high above the planet, Kelly Brunt, an assistant research scientist with Earth System Science Interdisciplinary Center (ESSIC) at the University of Maryland, told the Future Con audience at the panel.

Brunt recently returned from a two-month trip to Antarctica, where she was part of a four-person team gathering data in support of a new NASA satellite mission called ICESat-2, launching in November 2018. ICESat-2 will use lasers to track shifts in sea ice elevation, to calculate how those changes in ice sheets affect sea level rise, according to the mission website.

Brunt’s team gathered data that will help to corroborate the results of ICESat-2’s forthcoming elevation data — which the satellite will calculate with a degree of accuracy that can be measured in centimeters, she told the audience.

Over 14 days, the team trundled across the ice on motorized sleds outfitted with antennas to collect GPS data. They traveled about 466 miles (750 kilometers) at a rate of about 5 mph (8 km/h), in temperatures of minus 4 degrees Fahrenheit (minus 20 degrees Celsius), Brunt said.

The food was mediocre at best — supplies included a lot of junk food, including a stash of “very old Slim Jims” that most of the crew refused to touch — but the spectacular vistas more than made up for it, Brunt recalled.

“There’s a beauty to the starkness of Antarctica that I really can’t explain,” she said.

Studying forests from space, the air and the ground

Fatoyinbo-Agueh combines satellite observations with airborne laser imagery to monitor the health of vegetation in the forest canopies, and to track the impacts of sea level rise on coastal ecosystems.

But field work plays a part as well — and penetrating dense mangroveregions to deploy sensors for measuring tidal data required exhausting hours of carefully climbing the trees’ enormous roots, or slogging through thick mud that was hip-deep, Fatoyinbo-Agueh.

“It takes a lot of teamwork to get out there — to go 20 feet [6 meters] took about 10 minutes of climbing,” after which the researchers were so spent they needed to be helped back into the boat, she told the audience.

Other NASA science draws from even warmer Earth locales — such as lava fields near Hawaii’s Kilauea Volcano. By examining lava deposits that build up over time, experts can unravel the workings of volcanos on other planets, according to Jacob Richardson, a NASA GSFC postdoctoral fellow and volcano researcher.

Near Kilauea is a broad lava plain that has taken centuries to accumulate, offering clues about how volcanoes might form on Mars, Io, and other worlds within our solar system, Richardson said during the panel. He recently visited Kilauea to look at a relatively new lava flow, one that had emerged in 1974, over only six hours. To reach the field, the scientists had to trek for two miles (3.2 km) daily, carrying up to 60 pounds (27 kilograms) of gear apiece, probing the lava placement with chemical analysis and Light Detection and Ranging (LIDAR), a measurement tool that uses laser pulses to calculate elevation.

Gas plumes from the volcano frequently blew directly over the site where they were working, and the sulfur dioxide fumes were so strong that the researchers often had to wear masks, Richardson told the audience.

But in spite of the physical challenges and the often harsh conditions in the locations they visit, the scientists’ enthusiasm for their research was undeniable.

But it wouldn’t be a Future Con panel without a few geeky touches. Fatoyinbo-Agueh pointed out that an upcoming ecological NASA satellite mission, Global Ecosystem Dynamics Investigation, has an acronym with a touch of “Star Wars” to it — “GEDI.” And she ended her mangrove presentation with a resounding, “May the forest be with you!”