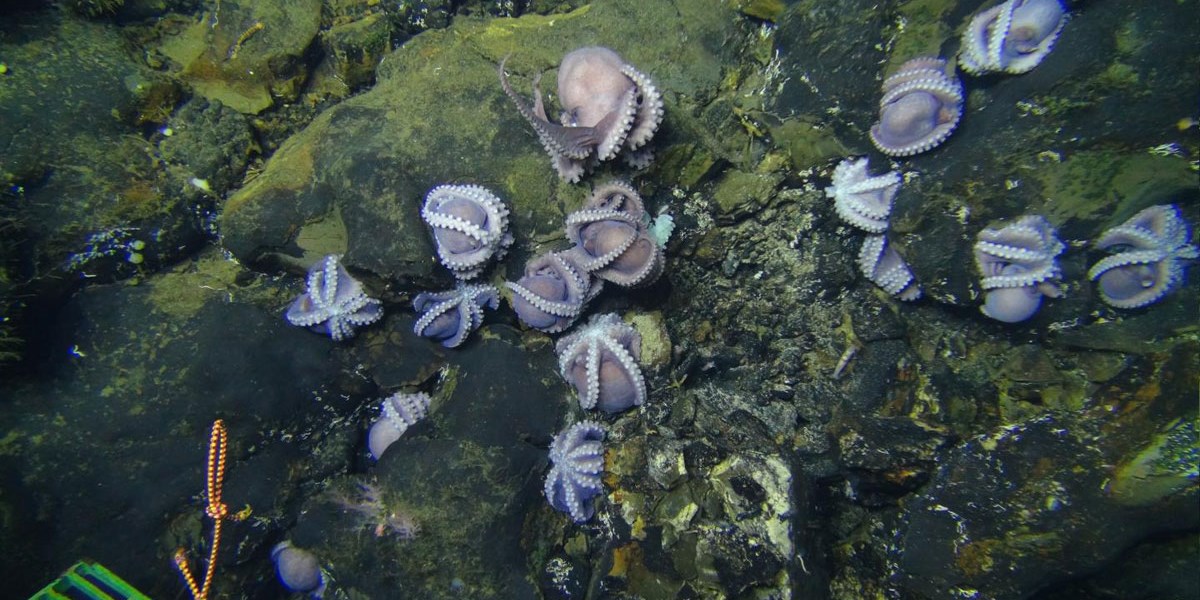 Want to see something incredible? Take a ship and head to a spot in the ocean 155 miles west of Costa Rica. Get in a submarine and descend more than 9,482 feet beneath the surface to a stretch of exposed, dark rock on the seafloor. Your headlights start to illuminate colorful creatures as you descend. There’s a sea star, there’s a sponge, there are some shrimp… Oh wow! There are more than 100 octopusesclinging to the rock.

It’s a sight that managed to stun even researchers who have spent their careers studying deep-sea octopuses.

“I’ve been working with deep sea octopus for 20 years, and I never would have said this was possible,” says Janet Voight, Associate Curator of Zoology at The Field Museum and co-author of a study on the curious critters recently published in Deep Sea Research Part I. “It’s great when you’ve been working on something for 20 years and you can still be amazed—there’s so much else out there.”

The octopuses were spotted in 2013 and 2014 during research that wasn’t cephalopod-centric at all—the National Science Foundation-funded mission was focused on the geophysics and geochemistry in the area, looking for pockets of warm water seeping out into the chill depths. Where the water in this area of the sea is normally around 35 degrees Fahrenheit, the fluid seeping out of the seafloor was closer to 53 degrees, a much balmier temperature. And in that spot, there happened to be a gaggle of dozens of octopuses—creatures that are normally pretty solitary.

But the octopuses probably weren’t drawn to the area by those snuggly-warm waters.

“They’re there by coincidence, likely driven by the fact that there is bare rock that is likely suitable for the attachment of their egg clutches,” says lead study author Anne Hartwell, a research technician at University of Alaska Fairbanks. “When you try to put a piece of tape on a surface, you want to put that tape on a clean surface, because it will stick better than if you put it somewhere that has sand on it.”

Octopuses have the same preference, she explains. They use a natural adhesive to glue their eggs to a hard surface, like this outcrop at the bottom of the sea. Normally, that would be a good life choice. But the warm water that oozes out of this particular rock—the very thing that made it intriguing to researchers—would pose a problem for octopuses. The deep-sea creatures are adapted to the area’s frigid waters, and warmer surroundings would raise their metabolisms and cause physical stress. The water surrounding their firmly-cemented eggs is also depleted in oxygen, which means they have to work harder to respirate as well.

“It’s possible that they arrive at the outcrop when there’s no discharge, and that’s when they attach their eggs to the surface. It could also be that they don’t know this warm fluid is going to harm them,” Hartwell says. “The rest of the deep ocean is so uniform in temperature—why would they have been exposed to any warmer temperatures to know that they are stressed out by it?”

All of the eggs, which need oxygen to survive, were empty when researchers observed them, a potentially devastating blow to the octopus population—a female octopus spends years brooding her eggs, and only spawns once.

“We go from ‘look at this wonderful, glorious discovery, all these octopuses in the bottom of the depth range for this genus!’ to ‘something’s funny here’ to ‘I think they all die.’ It’s an emotional rollercoaster,” Voight says.

But the ride wasn’t over yet. The unfortunate octopus mothers weren’t the only ones present. Other octopuses were seen nearby, in the more oxygen rich waters, and a few octopus legs poked curiously out of cracks in the rocky seabed. The researchers think the creatures seen on the surface might be members of a much larger population, some of which might have taken up prime locations inside the rock—potentially protected from the devastating effects of the warmer fluid.

Currently, there are no plans to return and study the lurking octopus population, though there are a few grant proposals in the works. Submarines are expensive, and take massive amounts of logistical work to manage once approved. For this study Hartwell and Voight made extensive use of the hours of footage amassed during the earlier mission led by their co-author Geoff Wheat. They binge-watched hours of octopus footage taken from the submarine, waiting for glimpses of tentacles of the unidentified species of Muusoctopus that dominated the rocks. Until they get a chance to go back, we only have those glimpses of this strange, sad nursery.