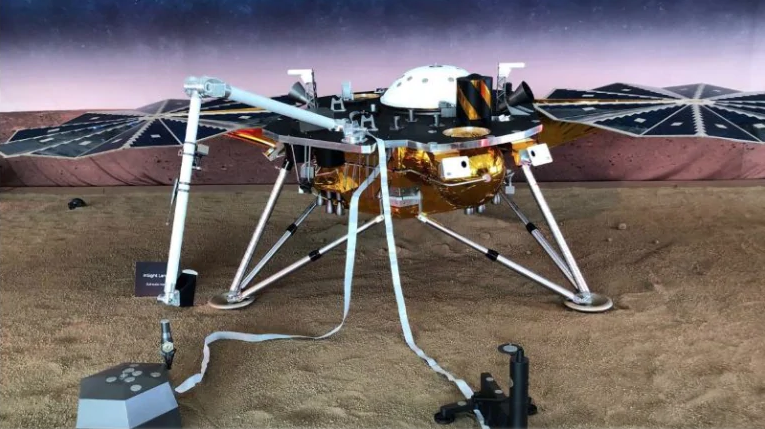 Nasa’s first spacecraft designed to explore the deep interior of another planet streaked toward a landing on a vast, barren plain on Mars scheduled for Monday, carrying instruments to detect planetary heat and seismic rumblings never measured anywhere other than Earth.

After sailing 301 million miles (548 million km) on a six-month voyage through deep space, the robotic lander InSight was due to touch down on the dusty, rock-strewn surface of the Red Planet at about 8 pm GMT.

If all goes according to plan, InSight will hurtle through the top of the thin Martian atmosphere at 12,000 miles per hour (19,310 kilometers per hour). Slowed by friction, deployment of a giant parachute and retro rockets, InSight will descend 77 miles through pink Martian skies to the surface in 6 1/2 minutes, traveling a mere 5 mph (8 kph) by the time it lands.

The stationary probe, launched in May from California, will then pause for 16 minutes for the dust to settle, literally, around its landing site, before disc-shaped solar panels are unfurled like wings to provide power to the spacecraft.

The mission control team at Nasa’s Jet Propulsion Laboratory (JPL) near Los Angeles hopes to receive real-time confirmation of the craft’s arrival from data relayed by a pair of miniature satellites that were launched along with InSight and will be flying past Mars.

The JPL controllers also expect to receive a photograph of the probe’s new surroundings on the flat, smooth Martian plain close to the planet’s equator called the Elysium Planitia.

The location is approximately 373 miles (600 kilometres) from the 2012 landing site of NASA’s car-sized Mars rover Curiosity, the last spacecraft sent to the Red Planet.

The smaller, 880-pound (360 kg) InSight mission, which stands for Interior Exploration Using Seismic Investigations, Geodesy, and Heat Transport, is the 21st US-launched Mars mission, dating back to the Mariner fly-bys in the 1960s. Other countries have sent nearly two dozen Mars missions.