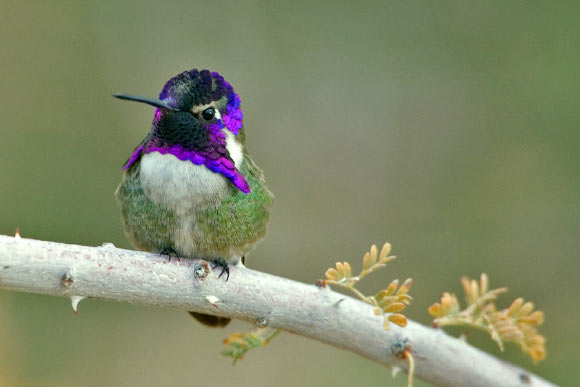 The Costa’s hummingbird (Calypte costae) is a small species of hummingbird endemic to the far west region of the United States and Mexico. During breeding season, male Costa’s hummingbirds perform a high-speed dive during which they ‘sing’ to potential mates using their tail feathers. Unlike related species, male Costa’s perform their dives to the side of females, rather than in front of them. In a new study, a duo of scientists from the University of California, Riverside shows this trajectory minimizes an audible Doppler sound that occurs when the bird dives.

“Doppler shift is the sound of an ambulance passing you by — the sudden down-shift in its tone when it goes from in front of you to behind you. Male Costa’s hummingbirds dive in a way that minimizes how audible that sound is,” said Dr. Christopher Clark, from the Department of Biology at the University of California, Riverside.

They also conducted experiments in a wind tunnel to examine how the birds’ speed and direction influences the sounds they make.

Those videos led to interesting discoveries: (i) male Costa’s hummingbirds dive off to the side of females, in a way that minimizes the Doppler shift effect; (ii) males aim their sound by twisting half of their tail vertically by up to 90 degrees.

“We don’t know why males twist only half of their tails toward the females, but it may be due to anatomical limitations that prevent them from twisting their whole tail around,” Dr. Clark said.

While the researchers don’t know exactly how these maneuvers sound to female hummingbirds, the findings suggest that males can strategically manipulate the way females perceive their displays, by diving in a way that conceals how fast they are going.

“Does this mean males are cheating to look better — or faster — than they really are? Not necessarily,” the scientists said.

“As far as we know, all males twist their tails in essentially the same way.”

“Most research has focused on static male attributes, such as bright colors or elongated tails, but our research shows that dynamic displays may be just as important, and males strategically control these performances to show themselves in the best possible light,” Dr. Clark said.

The study appears in the journal Current Biology.