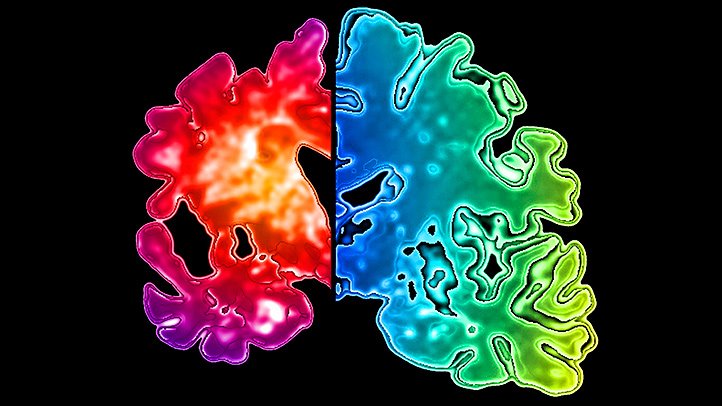 Alzheimer’s disease is investigated by scientists broadly. Although there is no definitive treatment, a better medical intervention can be assumed as a preventive medicine which postpones the onset of disease and delays its progression. Understanding that the sleep changes affect the brain which it will be stabilized later as a cardinal manifestation of the disease leads us to review recent studies and theories. In this review, we show that the interruption of circadian rhythm along with disruption of immune and endocrine systems can cause neuronal physiology changes. These changes can enhance neuro inflammation pathology by the time through Aβ deposition forming plaques in the brain tissue. Besides the higher level of Aβ in CSF, immune system dysfunction occurred by aging will change the solubility of Aβ. Furthermore, the defect in insulin and subsequently decreases in insulin receptor impair glucose metabolism. The dysregulation of glucose metabolism expedites the degenerative pathway and contributes to other oxidative stresses in neurons. The cortex of the brain gradually will be damaged extremely and the brain size will shrink intensely and atrophy. In summary, we found that improving of sleep quality can reduce the disease progression and delay its symptoms by having effects in neuropathology.

Alzheimer’s disease (AD) is associated with hallmark pathologies including extracellular Aβ protein deposition in extracellular senile plaques and vessels, and intraneuronal tau deposition as neurofibrillary tangles.
The current study comprises the oxidative modifications associated with the pathological lesions of neuronal damage characterized AD. The repeated exposure to aluminium and heavy metals, mutations in a number of chromosomes and genes, diabetes, cardiovascular diseases, obesity and brain injury, are the major causes for these modifications.
There is clearly a need for the identification and development of panels of biomarkers for accurate diagnosis and early detection of the sporadic AD. Thus, a collection of the most globally manifested expeditious diagnostic tools for early detection of AD is outlined in this review. Also, a survey of the vast clinically approved therapeutic modalities for restricting and even treating the symptoms of AD is summarized. These arguments provide useful information in both understanding pathogenesis as well as accessing the novel treatment approaches for AD.

Alzheimer Disease and Environmental Exposure to Neurotoxic Factors: A Controversy

Background: Common neurodegenerative diseases including Alzheimer disease are a major public health issue because of their high prevalence and etiopathogenic complexity. Ageing, combined with a genetic predisposition and modifiable risk factors including cardiovascular factors, has been shown to be the main risk factor of Alzheimer and related diseases. The international scientific community suspects that physicochemical environmental factors may be involved. The lack of consensus justifies a general review of current knowledge on the role of environmental neurotoxic factors in the occurrence of some neurodegenerative diseases, particularly Alzheimer disease.
Methodology: A literature search was conducted on PubMed using the keywords dementia, dementia syndrome, Alzheimer disease, Alzheimer type dementia, exposure, neurotoxicity aluminium, mercury, pesticide. After reading all of the abstracts and ruling out irrelevant articles, only relevant articles in English or French were selected. We read more than 600 abstracts and based on these we selected and read 352 articles, 176 for each of the two authors. Finally, our bibliography includes 78 articles.
Results: The neurotoxicity data from animal experiments are old, and in the professional environment there is no evidence regarding the gradient of environmental toxicity. Synergistic, multiple-factor neurotoxicity is complex and difficult to document epidemiologically as it is due to a cumulative toxic continuum rather than a dose/effect relationship. Within this recognized multi-causal model of neurodegenerative diseases, particularly Alzheimer disease, chronic exposure to neurotoxic products has a real pathogenic effect on the central nervous system through certain aspects of this effect are not entirely proven.
Conclusion: The lack of overall agreement about precautions for heavy metals does not mean that latent and prolonged exposure to these products is safe, especially with regard to the potential risk of worsening neurodegenerative diseases.