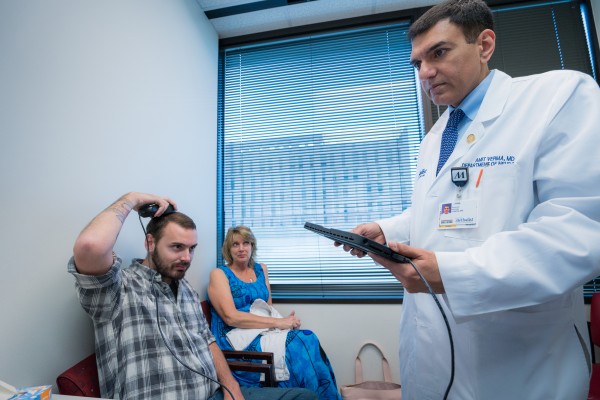 Available for logged-in reporters only

Newswise — Richard Pollitt was at the end of his rope after years of suffering regular seizures, with some lasting five minutes and preventing him from working and enjoying his favorite pastimes. Desperate for relief after medications did not work, Pollitt had a small battery-powered device implanted in his skull to control seizures. Now he rarely has them.

“Traditional surgery wasn’t an option for Richard because removing tissue from both sides of the brain would have left him with no memory,” said Amit Verma, M.D., a Houston Methodist neurologist who specializes in epilepsy and seizures. “After considering a range of options, we decided that Richard would be a good candidate for a device that can help stop seizures from both regions of the brain.”

The RNS System, or responsive neurostimulation device, treats patients with refractory epilepsy by continually observing and recording brain activity, recognizing abnormal signals, and producing small electrical pulses to stabilize brain activity and help stop seizures before physical symptoms appear. Developed by Neuropace, the system consists of a neurostimulator that is implanted into the skull and a remote that allows patients to wirelessly collect information for their physician. Once the device is turned on, it logs valuable data that allows physicians to track a patient’s treatment and improve care.

“The data from the device shows that Richard has had only three seizures since the surgery in January,” Verma said. “That’s close to a 95 percent reduction rate in seizures, which is a remarkable improvement.”

Pollitt’s mother, Peggy, said the surgery has given her 27-year-old son a fresh start in life and provided peace of mind to his family.

“The device is so discreet that he can’t feel it,” Peggy said. “His medication doses have been reduced, he’s experienced increased energy levels and improved memory and clarity, and he rarely has seizures now. Any seizures he does have don’t last as long and aren’t nearly as severe as before.”

Verma said there are very few patients, if any, who become completely seizure free with the RNS System. However, it has been proven an effective treatment in clinical studies as patients experienced a significant reduction rate in seizures that continued to improve over time.

Moving forward, Pollitt will visit Verma every three months and will have the device’s battery replaced every three to five years.