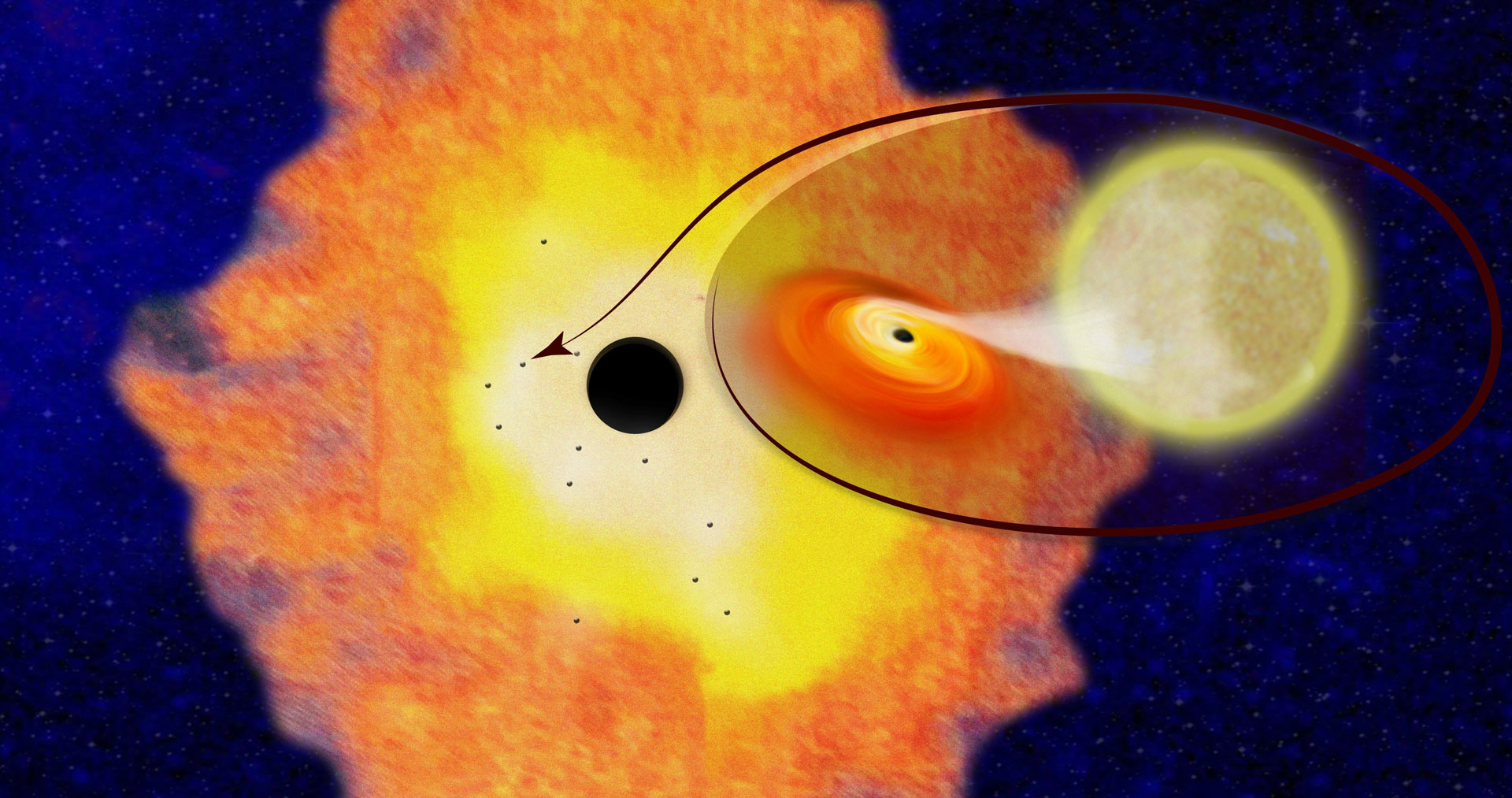 A Columbia University-led team of astrophysicists has discovered a dozen black holes gathered around Sagittarius A* (Sgr A*), the supermassive black hole in the center of the Milky Way Galaxy. The finding is the first to support a decades-old prediction, opening up myriad opportunities to better understand the universe.

“Everything you’d ever want to learn about the way big black holes interact with little black holes, you can learn by studying this distribution,” said Columbia Astrophysicist Chuck Hailey, co-director of the Columbia Astrophysics Lab and lead author on the study. “The Milky Way is really the only galaxy we have where we can study how supermassive black holes interact with little ones because we simply can’t see their interactions in other galaxies. In a sense, this is the only laboratory we have to study this phenomenon.”

The study appears in the April 5 issue of Nature.

For more than two decades, researchers have searched unsuccessfully for evidence to support a theory that thousands of black holes surround supermassive black holes (SMBHs) at the center of large galaxies. Figure 3 : Chandra 2–8-keV image of the Galactic Centre with X-ray sources with C ≥ 100 overlaid. Thermal (HR2 > 0.3) and non-thermal (HR2 < 0.3) sources are indicated with red and cyan circles, respectively. The colour scale indicates the number of 2–8-keV counts per pixel. The inner and outer yellow circles delineate the 0.2 pc < r < 1 pc region around Sgr A*. The inner region was excluded from the analysis. The magenta ellipse (7.8 pc × 3.9 pc, full-width at half-maximum) bounds the region of spatially unresolved hard X-ray emission that was discovered by NuSTAR and is due to thermal emission from intermediate polars. The non-thermal sources cluster inside the inner parsec, whereas the thermal sources are distributed more uniformly throughout the hard X-ray emission. The Galactic plane runs along the semi-major axis of the ellipse. The dearth of sources to the north of the Galactic plane is due to strong extinction from molecular clouds (such as the circumnuclear disk), which densely populate that region. This may reduce the estimated number of sources by a factor of a few. Some bright sources without circles are X-ray transients, including the outbursting neutron-star low-mass X-ray binary AX J1745−2901 in the lower right corner. For reference, Chandra’s angular resolution is 0.5 arcsec, which corresponds to about 0.025 pc at the Galactic Centre. Nature volume 556, pages 70–73 (05 April 2018) doi:10.1038/nature25029

“There are only about five dozen known black holes in the entire galaxy — 100,000 light years wide — and there are supposed to be 10,000 to 20,000 of these things in a region just six light years wide that no one has been able to find,” Hailey said, adding that extensive fruitless searches have been made for black holes around Sgr A*, the closest SMBH to Earth and therefore the easiest to study. “There hasn’t been much credible evidence.”

He explained that Sgr A* is surrounded by a halo of gas and dust that provides the perfect breeding ground for the birth of massive stars, which live, die and could turn into black holes there. Additionally, black holes from outside the halo are believed to fall under the influence of the SMBH as they lose their energy, causing them to be pulled into the vicinity of the SMBH, where they are held captive by its force.

While most of the trapped black holes remain isolated, some capture and bind to a passing star, forming a stellar binary. Researchers believe there is a heavy concentration of these isolated and mated black holes in the Galactic Center, forming a density cusp which gets more crowded as distance to the SMBH decreases.

In the past, failed attempts to find evidence of such a cusp have focused on looking for the bright burst of X-ray glow that occurs when black holes mate with companion stars.

“It’s an obvious way to want to look for black holes,” Hailey said, “but the Galactic Center is so far away from Earth that those bursts are only strong and bright enough to see about once every 100 to 1,000 years.” To detect black hole binaries then, Hailey and his colleagues realized they would need to look for the fainter, but steadier X-rays emitted after the initial bonding, when the binaries are in an inactive state.

Hailey and colleagues turned to archival data from the Chandra X-ray Observatory to test their technique. They searched for X-ray signatures of black hole-low mass binaries in their inactive state and were able to find 12 within three light years, of Sgr A*. The researchers then analyzed the properties and spatial distribution of the identified binary systems and extrapolated from their observations that there must be anywhere from 300 to 500 black hole-low mass binaries and about 10,000 isolated black holes in the area surrounding Sgr A*.

“This finding confirms a major theory and the implications are many,” Hailey said. “It is going to significantly advance gravitational wave research because knowing the number of black holes in the center of a typical galaxy can help in better predicting how many gravitational wave events may be associated with them. All the information astrophysicists need is at the center of the galaxy.”