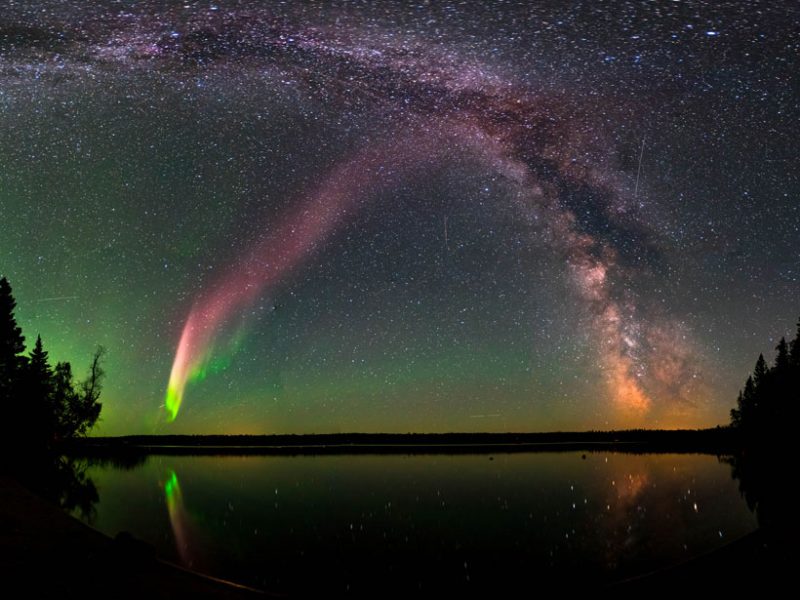 Meet STEVE, a purple and green, low-latitude, aurora-like phenomenon whose inner workings were uncovered with the help of citizen scientists.

Strong Thermal Emission Velocity Enhancement (STEVE) paints a green and purple streak across the sky from the bottom left to top right in the image above. In this image, this rare aurora-like event is crisscrossed by the dusty band of the Milky Way, which curves from the top left to bottom right.

New insight into the origin and behavior of this rare atmospheric event became possible when, in 2016, a team of amateur and professional scientists used ground- and space-based cameras to image STEVE and a simultaneous normal aurora. By combining all of the available images, the team discovered that STEVEs and auroras form from a similar process—charged particles interacting with Earth’s magnetic field—but the particles that create STEVEs travel along magnetic field lines much closer to Earth than those that make ordinary auroras. That’s why STEVEs occur at lower latitudes than auroras.

In addition, the scientists were excited to discover that STEVEs are the visual counterpart to subauroral ion drift (SAID), a phenomenon studied since the 1970s. Finding out that SAIDs can have an accompanying visible feature suggests that there may be more going on in the subauroral zone of the atmosphere than scientists had thought, according to the scientific paper on this discovery, which the team published in Science Advances on 14 March.