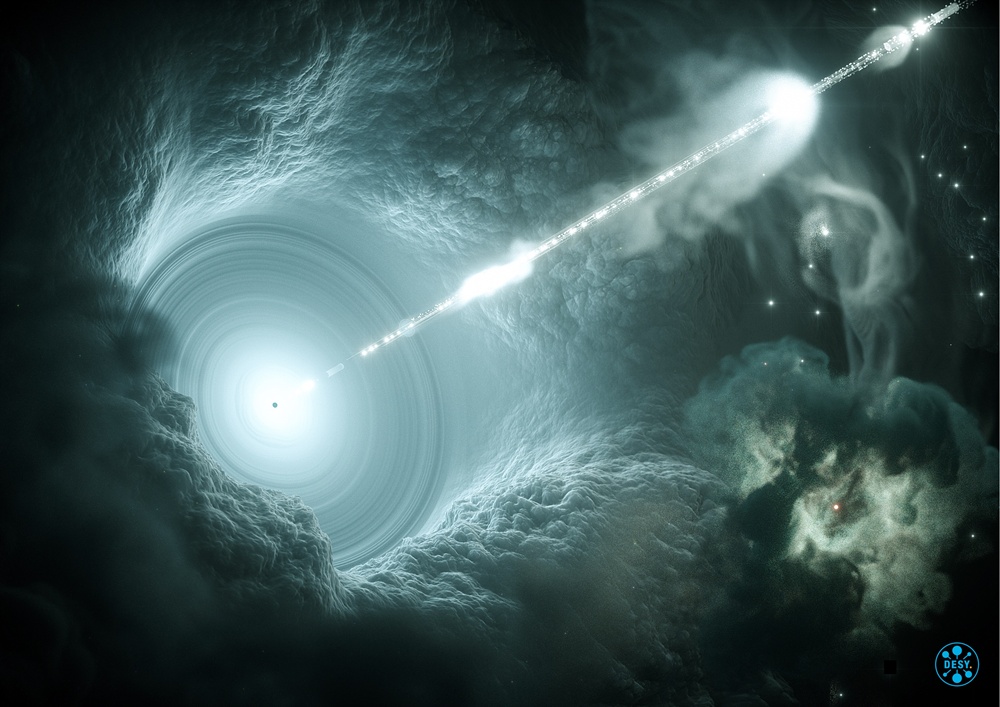 The rare detection of a high-energy neutrino hints at how these strange particles are created.

Four billion years ago, an immense galaxy with a black hole at its heart spewed forth a jet of particles at nearly the speed of light. One of those particles, a neutrino that is just a fraction of the size of a regular atom, traversed across the universe on a collision course for Earth, finally striking the ice sheet of Antarctica last September. Coincidentally, a neutrino detector planted by scientists within the ice recorded the neutrino’s charged interaction with the ice, which resulted in a blue flash of light lasting just a moment. The results are published today in the journal Science.

This detection marks the second time in history that scientists have pinpointed the origins of a neutrino from outside of our solar system. And it’s the first time they’ve confirmed that neutrinos are created in the supermassive black holes at the centers of galaxies — a somewhat unexpected source.

Neutrinos are highly energetic particles that rarely ever interact with matter, passing through it as though it weren’t even there. Determining the type of cosmological events that create these particles is critical for understanding the nature of the universe. But the only confirmed source of neutrinos, other than our Sun, is a supernova that was recorded in 1987.

Physicists have a number of theories about what sort of astronomical events may create neutrinos, with some suggesting that blazars could be a source. Blazars are massive galaxies with black holes at their center, trying to suck in too much matter at once, causing jets of particles to be ejected outward at incredible speeds. Acting like the giant counterparts to terrestrial particle accelerators, blazar jets are believed to produce cosmic rays that can in turn create neutrinos.

“This [detection] in particular is a chance of nature,” says Darren Grant, a lead scientist of the team that first discovered the high-energy neutrino, as part of the neutrino detection project IceCube. “There’s a blazar there that just happened to turn on at the right time and we happened to capture it. It’s one of those eureka moments. You hope to experience those a few times in your career and this was one of them, where everything aligned.”
Blazars are active supermassive black holes sucking in immense amounts of material, which form swirling accretion disks and generate high-powered particle jets that churn out particles that astronomers have believed eventually result in neutrinos.
DESY, Science Communication Lab
A cosmic messenger
On September 22, 2017, the neutrino reached the Antarctica ice sheet, passing by an ice crystal at just the right angle to cause a subatomic particle (called a muon) to be created from the interaction. The resulting blue flash was recorded by one of IceCube’s 5,160 detectors, embedded within the ice. Grant was in the office when the detection occurred. This neutrino was about 300 million times more energetic than those that are emitted by the Sun.Grant and his colleague briefly admired the excellent image depicting the trajectory of the muon, which provides basic information necessary to begin tracing back the neutrino’s origin. However, they weren’t overly excited quite yet. His team observes about 10 to 20 high-energy neutrinos each year, but the right combination of events — in space, time and energy, for example — is required to precisely pinpoint the source of the neutrino. Such an alignment had eluded scientists so far. As Grant’s team began their analysis, though, they began to narrow in on a region: an exceptionally bright blazar called TXS 0506+056.